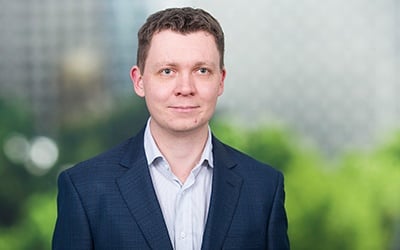 Recently we’ve been writing quite a few ‘bulk’ APIs - where consumers don’t want a single resource, or a screenful of search results but instead need (close to) the entire record set. In this blog we discuss several features of the Mule ESB platform that make is easy to design and implement bulk APIs over a variety of back-end technologies.

When your API deals with small messages (i.e. single resource or a screen’s worth of search results) it is trivial to pull into memory all the code and data you need to handle an API call. On the other end of the spectrum is up- or downloading the gigabyte- or terabyte-sized datasets common to web-scale analytics workloads - true ‘big data’ problems.

In a ‘bulk’ API, data size is somewhere in the middle. Not so large as to require a dedicated mass data loading channel, but large enough the we need to design and code carefully to avoid pulling our full dataset into memory. Let’s call it a ‘big-ish data’ problem. The key concept to embrace is streaming at all stages in your code, so you can process your large dataset a portion at a time, retrieving input data on demand and sending output as soon as it is ready.

This is especially true if there is data transformation involved since naive coding might result in you holding multiple copies of your entire dataset in memory while the transformation is in process.

Restful Application Markup Language (RAML) is an industry standard for developing APIs in a contract-first style. Mule has excellent support for RAML through its APIKit module.

A RAML API definition is a YAML document that describes REST resources, methods, inputs and outputs. A very helpful feature is the ability to externalise schemas and sample messages into separate files and then reference them in the RAML. Your sample messages can then form the core of your development workflow:

For an excellent in-depth tour of RAML, see this tutorial: Designing an Event Log API with RAML.

The secret to designing effective Bulk APIs with RAML is this:

There is no spoon.

A Bulk API is just an API. Nothing about the definition of your API contract changes just because your resource representations will be large. This is the beauty of contract-first development: it stops implementation details leaking into your interface.

Why CSV is (still) cool

REST APIs tend to deal with internet-standard media types: XML, JSON etc. While it’s possible to write a Bulk API for many of these formats their tree structure makes it more difficult to stream data, particularly through a transformation step.

A great media type choice in these cases is the CSV (Comma Separated Values) format. CSV is often maligned as old-fashioned or overlooked altogether, however it has several qualities that make it ideal for large datasets:

CSV is by no means perfect. There is no support for datatypes (everything is a string) and the IETF standard is recent and not universally supported. If your data is a big long table though, CSV is worth consideration.

A little bit of Lambda goes a long, long way

As mentioned before, the tricky part of Bulk APIs is the implementation. You need the right patterns and the right technologies to retrieve, transform and publish data in a streaming fashion. It becomes even trickier when you need to compose those steps into a single flow and maintain the streaming property.

To tackle this we can adopt some concepts from Functional Programming. Let’s imagine our Mule flow as a function. Normally this function maps a request to a response directly:

Visually the Mule flow would look something like this (the back-end system in this example is a database query but it could be any Mule endpoint that supports streaming or iteration):

Note: Mule APIKit places the API router and the logic of each operation in separate flows. I’ve combined these into a single flow because it makes it easier to visualise.

In a Bulk API we want to change this so that the flow returns a function that outputs the response to an output stream:

The response half of the flow logic is no longer executed immediately. Instead it becomes the logic of an anonymous function / lambda / callback. Mule invokes the callback function once it has begun writing the HTTP response to the consumer (and so actually has an output stream to pass in to the callback as the input parameter).

Visually the Mule flow remains unchanged, but I’ve highlighted the part of the flow that becomes the streaming callback logic:

When Mule invokes the callback function, the following takes place:

When properly implemented, your callback is not only streaming but lazy. Just enough data is read from the back-end response stream just in time to output the next fragment of the response.

Mule specifies its own interface org.mule.api.transport.OutputHandler that your flow logic must implement in order to be treated as a streaming callback. That is: the MuleMessage payload at the end of the flow needs to be an instance of this interface. The interface code is reproduced below:

view rawOutputHandler.java hosted with ❤ by GitHub

There is nothing stopping you from hand-coding an implementation of the OutputHandlerclass. However Mule provides several features that make creating such callbacks, as well as composing them together, much easier. Let’s take a look at a few of these:

The Database connector was introduced in Mule 3.5, replacing the older JDBC transport. It supports a streaming mode built on the underlying java.sql.ResultSet cursor. Enabling this behaviour is as simple as checking the ‘streaming’ checkbox on the DB query processor. 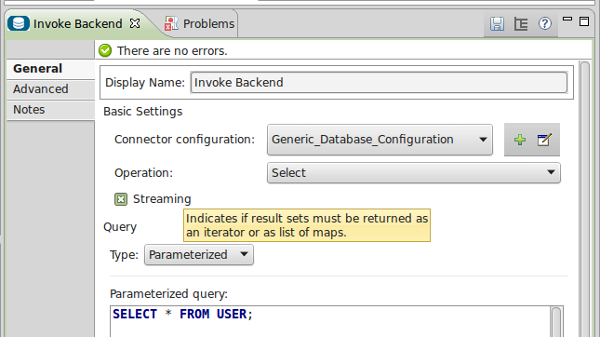 With streaming disabled, the DB query processor returns a List of Maps. With streaming enabled, the output payload becomes an Iterator of Maps. when the next() method is called on the iterator, the DB module reads a single row from the underlying ResultSet and converts it into a Map[column name -> column value].

Streaming the response from an HTTP back-end service is beautifully simple - you don’t need to do anything. By default the output from a Mule <http:outbound-endpoint> is already a java.util.InputStream making it ideal to feed into a streaming transformation step.

Many 3rd party APIs implement a ‘paging’ mechanism, where consumers must make multiple API calls with some kind of ‘page number’ or ‘record offset’ parameter in order to fully retrieve a large result set.

The MuleSoft Anypoint Connector DevKit is a simple yet powerful SDK for generating custom Mule connectors from annotated Java classes. This framework provides special support for interacting with paging APIs. Your DevKit processor method returns a ‘paging delegate’ object that keeps track of the ‘next page’ and, when invoked, queries the back-end and returns each page as a java.util.List of objects. DevKit flattens this ‘lazy list’ of pages into a single continuous iterator object that can be fed into subsequent transformation steps. See the DevKit Query Pagination documentation for more details.

AnyPoint DataMapper is a drag-and-drop data mapping and transformation tool provided with Mule Enterprise Edition deployments. It has its roots in the Open Source CloverETL library. DataMapper can transform to and from a range of common data formats and can operate in streaming mode (a reflection of its ETL heritage). DataMapper can stream transformations of structured data like XML and JSON.

As with the DB connector, enabling streaming in DataMapper is as simple as checking a box. Additionally you can specify the streaming buffer size (in bytes). Tuning this value may improve performance if your individual records are very small or very large. In streaming mode, the output payload of the DataMapper step will be a OutputHandler instance. 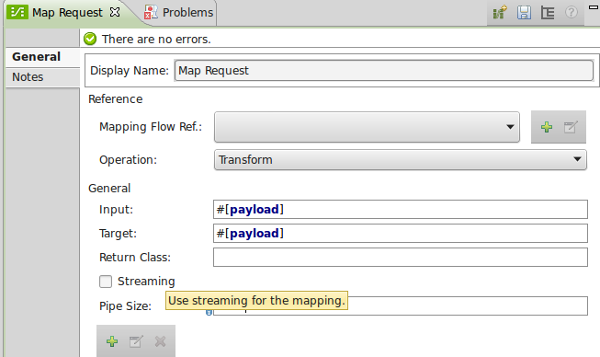 There are a few edge cases where writing a streaming DataMapper transform is not possible. In these situations it is possible to write transformations as Groovy scripts using Groovy’s ‘Builder’ classes. For XML, Groovy’s XMLSlurper and StreamingMarkupBuilderclasses support lazy parsing and streaming transformation. (For more on coding transformations in groovy see our articles on ‘Data Mapping with Groovy’ part 1 and part 2)

There is no OutputHandler magic here. The Groovy scripting approach requires you to actually code an implementation of the streaming callback. Luckily groovy syntax makes this quite streamlined:

view rawstreaming-xml-transform.groovy hosted with ❤ by GitHub

We faced some issues with our Mule APIKit applications not streaming despite very careful coding. Eventually we tracked the problem down to the Mule APIKit router component. APIKit is extremely strict about correct content type headers. Not only must the MuleMessage payload be stream-able but the Content-Type outbound property must align with the type specified in your RAML file. If the content type does not match (or you forgot to specify it), the APIKit router calls Mule’s automatic transformation logic which will:

Obviously, this is the exact opposite of what we’re trying to achieve, so always remember to set your Content-Type…

Hopefully this article has given you the resources to design and build your own Bulk APIs on the Mule ESB platform. Writing lazy streaming code is never easy, but if you understand the concepts behind what you’re trying to achieve Mule’s features can make your life a lot easier.