Posted by Akila Amarathunga on 24 October 2019

To deploy and manage these complex infrastructure configurations, businesses use Infrastructure-as-Code (IaC) and automation. When you use IaC to create hundreds of resources in cloud platforms such as AWS or GCP, how do you know that the code deploys those resources as expected? Do these resources adhere to compliance and security measures? In short, we don't know for sure, hence there's a requirement for proper infrastructure testing procedure.

Purpose of Infrastructure testing and compliance

If we look at some of the IaC tools available, they all come with some form of testing before deploying infrastructure into the platform.

Before jumping into infrastructure testing, let's take a few mins and explore IaC.

What is Infrastructure as Code (IaC)?

In simple term Infrastructure-as-Code as defined by ThoughtWorks:

“means writing code (which can be done using a high level language or any descriptive language) to manage configurations and automate provisioning of infrastructure in addition to deployments.”

Below are some popular IaC tools, as well as their feature set:

Most organisations use at least one or more IaC tools from the above list. If you analyse these tools, it is evident that each tool has its strengths and weaknesses which suit each organisation differently. We have tried most of these tools and have a preference towards Terraform due to ease of use in multi-cloud deployments. We also heavily use Ansible for configuration management. As a result, the rest of this post will focus on the use of Terraform, however the same concepts can be applied to the majority of IaC tools.

Terraform audits what is in Terraform state and marks changes that are not in its state as a drift, however Terraform can only audit what's known to it. Enter Inspec.

Chef InSpec is a "free and open-source framework for testing and auditing your applications and infrastructure" according to its website. "Chef InSpec works by comparing the actual state of your system with the desired state that you express in easy-to-read and easy-to-write Chef InSpec code. Chef InSpec detects violations and displays findings in the form of a report, but puts you in control of remediation."

According to its developers, some of the crucial capabilities of Chef Inspec are:

Terraform can enable Amazon Virtual Private Cloud (VPC) flow logs for a particular VPC if you have defined it in your desired state. However, Terraform is not capable of making the existence of flow logs mandatory. In comparison, Inspec is capable of defining controls which explicitly check VPC flow logs enabled for a given list of VPC IDs. Inspec can also be used to perform other checks, e.g. ensure there are no security rules which allows port 22 access from the public. Terraform can then create security group rules as defined in the desired state, or Terraform might remove/update rules if the known state doesn’t match the desired state.

The table below is a comparison between a few Terraform and Inspec capabilities from a compliance perspective.

The following section will explain how to get Inspec and Terraform running, and perform some of the checks mentioned above.

Details description of Inspec install can be found here.

However, I prefer to use a Docker container to run Inspec commands, mainly because then I don't have to worry about installing various dependencies on my laptop.

I have created a simple Dockerfile based on official chef/inspec image, which you can find here.

Note – Mount local folder of the Inspec profile into the container

Recently I had to set up an AWS ECS cluster to deploy a Sonarqube container. This environment consists of a VPC, Subnets, Security Groups, NAT Gateway, Internet Gateway, ALB, RDS, ECS and EC2. Since it covered most of the services use commonly, I decided to use it to try out Inspec.

I created a repository which includes the Terraform code to provision and configure the aforementioned components. The steps below clone the repository and perform steps to initialise then apply the Terraform scripts. It uses Terragrunt, a thin wrapper for Terraform "that provides extra tools for keeping your Terraform configuration dry, working with multiple Terraform modules, and manage remote state."

Inspec can create profiles for environments in which you plan to run audit and compliance checks. Some of the advantages of Inspec profiles are organisation of controls, dependencies, and code reuse for a particular environment.

To create a profile, run the following command:

Below are some of the tests created for the demo AWS environment:

The purpose of the VPC control is to:

The purpose of the security groups control is to:

The purpose of the subnet control is to:

The purpose of the IAM control is to:

The purpose of the RDS control is to:

Once you have written all the Inspec tests, run the tests against the environment using the following command:

The following screens show the sort of output expected after running the tests. 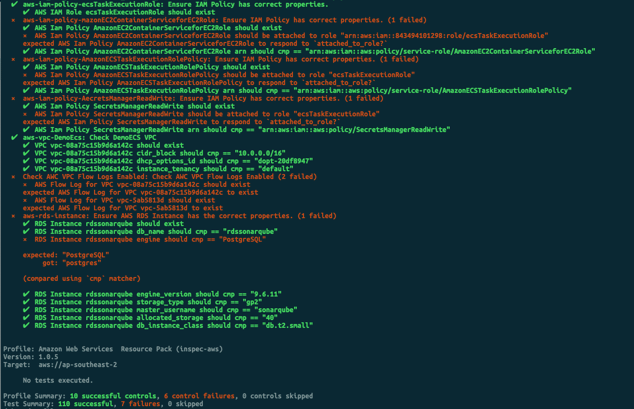 Consequently, we can use Inspec with CI/CD tools such as Jenkins to continuously test your deployed infrastructure to ensure it complies with compliance policies. Furthermore, it’s easy to write and read Inspec tests. Inspec tests are human-readable, and you don’t have to be a software engineer to understand tests.

As previously stated, Inspec works with all three major cloud platforms. Inspec is also capable of running tests in various operating systems. It has a growing ecosystem where developers have added various plugins and resource types, and has the capability to support custom libraries. This, in turn, allows users to write custom libraries and import these in to a profile if Inspec doesn't have out of the box support for a particular resource type.

In this post I have introduced and shown how to use two tools for provisioning and testing infrastructure. The two tools presented, Terraform and Inspec have enormous potential and compliment each other in quickly, securely and reliably deploying infrastructure, while also ensuring the deployments adhere to a variety of configurable compliance checks. While there are a number of similar tools in the market, I chose these two for the purpose of this post as they are easy to use for the techniques  demonstrated. Feel free to ask any questions regarding this post, or get in touch to see in more detail what we could unlock for your organisation.