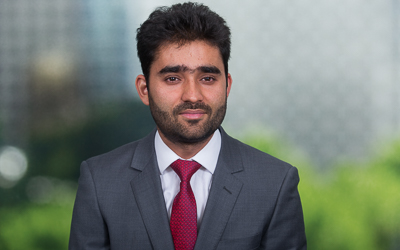 When I started working on Dell Boomi on one of our projects, I soon found out that it does not allow us access to the source code. Therefore, it becomes difficult to set up the CICD (Continuous Integration Continuous Deployment) of Boomi applications, as the conventional CICD process starts when someone merges code into the source repository. This code is then compiled and deployed to a runtime environment.  Since I didn’t have access to the source code, I needed to develop a workaround to automate the deployment.

Thankfully, Boomi allows you to interact with the platform through the Atomsphere API (Application Programming Integration). This API consists of a large set of operations, including most of the operations accessible via the UI. So, I thought of leveraging the Atomsphere API in conjunction with Azure DevOps to set up the automated deployment of Boomi applications. This blog will talk about the setting up of the automated deployment for Boomi applications.

Below is the overall flow that developers should follow once this automated deployment is setup. 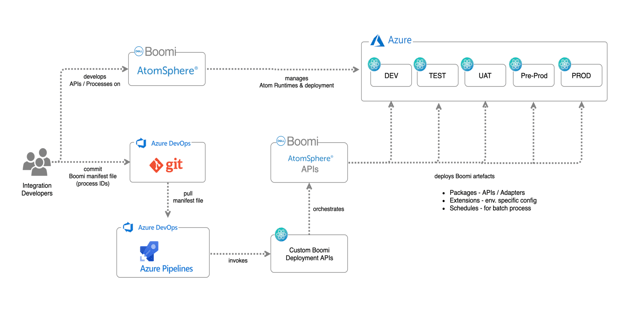 Deployment Automation API is something I created with the following rationale:

This endpoint receives requests when the build pipeline is triggered. This operation sends multiple requests to Atomsphere API, and creates packages of the listed components with the same package version number as the build.

Once the package is created, it's then time to deploy the packages in different environments. This endpoint receives the request when a release pipeline is triggered. It then sends a request to Atomsphere API for each component ID in the pipeline.

Please follow the below steps to set up the Azure DevOps side of the things:

Step by step guide once setup is finalised

Updates in the existing components

There is no need to update the repository with anything in this case. Follow the steps outlined below for the updated code to be deployed in required environments.

Automated Deployment of Boomi applications is possible using the Atomsphere API, a custom Deployment Automation API and Azure DevOps (or any other DevOps tool). This approach helps in the following:

1. Allows to package applications as a whole rather than individual processes.

3. Streamlines the process of promoting Boomi packages to higher environments.