Last week, Microsoft responded to numerous requests from the community by announcing a new developer tier offering for Integration Service Environments (ISE). The ISE has been generally available for several weeks, but the single available SKU prior to this announcement carried a hefty price tag.

I had the great honour and privilege of speaking about ISE at the INTEGRATE 2019 conference at Microsoft headquarters in Redmond, WA (USA) last month.  My topic was Four Scenarios for Using an Integration Service Environment, which attempted to shed some light on what type of situations would justify using this flat-cost product as opposed to the consumption-based serverless offering of Logic Apps.

While this presentation hopefully piqued interest in the offering, one of the burning questions from the attendees was "When will a lower cost developer SKU be available so we can try it out?"  All Microsoft was able to say at that point was, "Soon."  Well, at least they were right, as it is now available only a few weeks later!

What is an Integration Service Environment?

The ISE is a relatively recent offering from the within Microsoft’s Azure Integration Services that enables you to provision Logic Apps and Integration Accounts within a dedicated environment – much like App Service Environments enable you to do the same for App Services. The advantages of this include:

The VNET connectivity is a large driving factor for using an ISE. Consumption-based Logic Apps do not offer any direct integration with VNETs – they operate within a multi-tenant context inside of each Azure location.  This means that all connectors share the same pool of static outbound IP addresses for all instances deployed to that region. It also means that performance can potentially be affected by “noisy neighbours”. 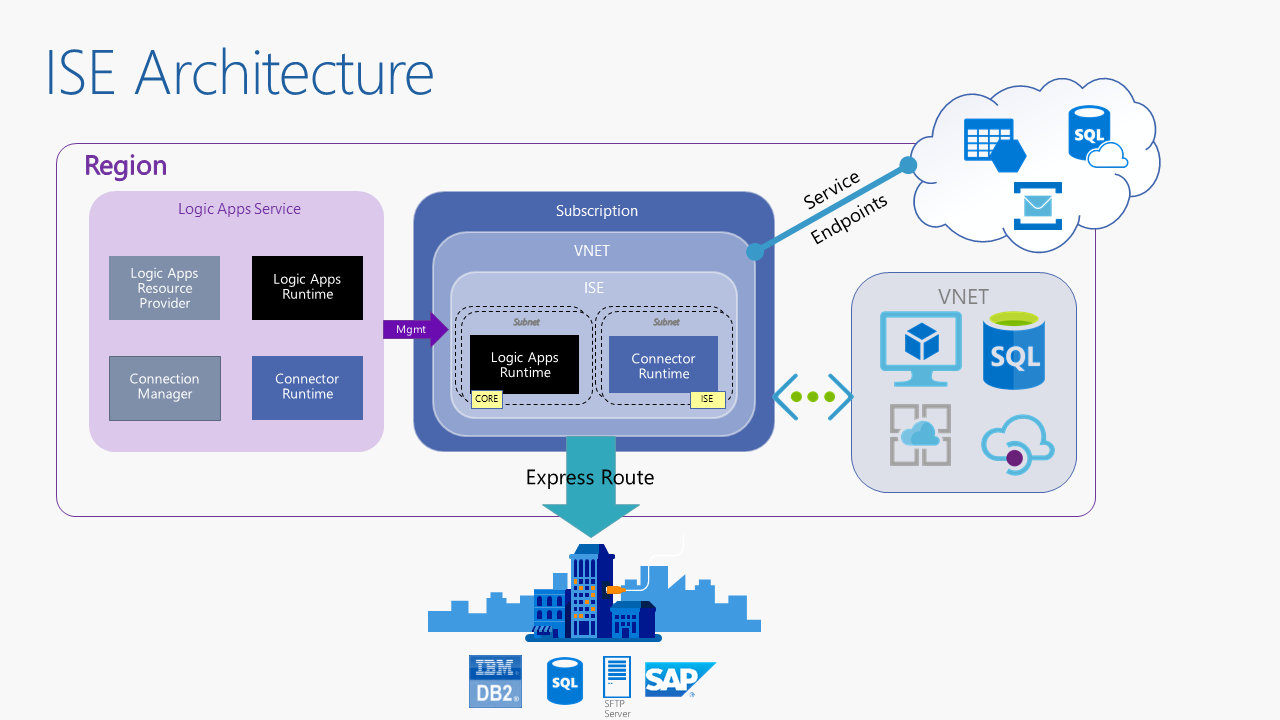 Because an ISE is injected into a VNET that you create, all the runtime components now operate within that VNET and as such are isolated from other resources in that region. It also gives you the ability to put network-level security controls around your Logic Apps (for example using Network Security Groups), and also explicitly control the scaling of your application as opposed to relying on the reactive scaling offered by the serverless option (mind you, auto-scaling rules are still available within an ISE).

While it may seem that the cost benefit is only realised in very high-volume scenarios, you need to consider that the base unit also includes a Standard Integration Account (worth ~US$1000/month) as well as an Enterprise Connector with unlimited connectivity (these connectors are charged at a higher rate in the consumption-based model). And that’s not considering the other benefits of an ISE (VNET connectivity, isolation, etc) that may justify the investment.  It is worth noting that VNET integration for most other Azure services generally requires a premium tier or plan (e.g. Service Bus, API Management, Functions, Event Hubs).

Still, the cost of an ISE in production is a significant investment, just as it is for an ASE. That can make it an expensive proposition, particularly for deployment into non-production environments (DEV, TEST).  Initially, the ISE was only available in one SKU.

That is why the announcement last week was so greatly anticipated. The new developer pricing tier allows organisations to deploy and test an ISE in non-production environments at approximately one-sixth of the base cost of the production SKU (please refer to the Logic Apps pricing page). This makes it a much more affordable proposition and opens up the ISE to many organisations that would otherwise be unable to afford it.

Or course, this developer tier offers no SLA, does not support additional scale units, and includes only a free integration account – so this is definitely not suited for production use. It is a good idea to review the artefact limits imposed on integration accounts.

To choose the developer tier, simply select the non-premium option from the SKU drop-down list when creating your ISE: 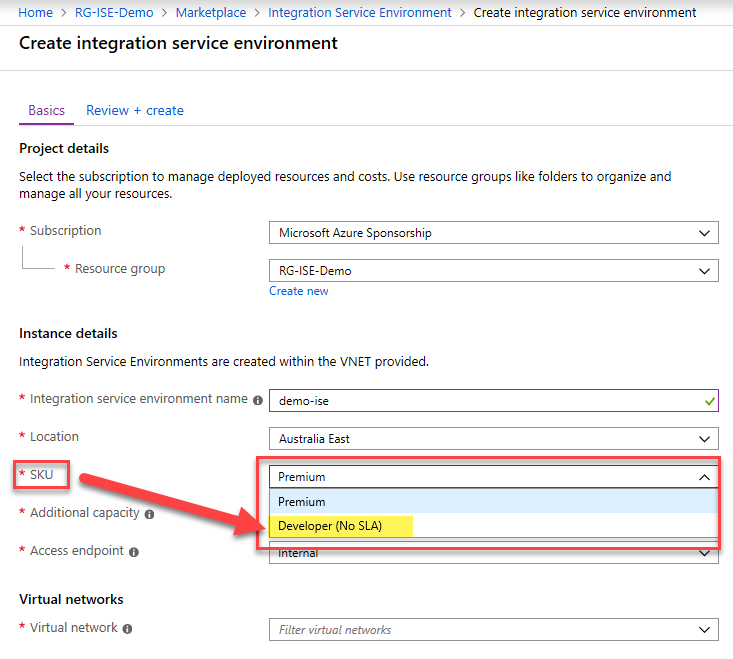 For detailed instructions on how to provision an ISE including all of the pre-requisites, please refer to the Microsoft documentation.

Azure Integration Service Environments offer a solid solution for integrating your Logic Apps with a VNET, enabling your entire integration solution to be managed within the controls of a private network. It enables additional security controls and better performance in hybrid scenarios over the On-Premises Data Gateway, whilst reducing the impact of “noisy neighbours”. The introduction of the developer pricing tier now makes it much more affordable for enterprises to build and test solutions using an ISE before committing to production.