The purpose of this blog is to help readers understand various scenarios where we can use Amazon Web Services (AWS) network component Transit Gateway and optimise the platform architecture by simplification of network components.

In short, AWS Transit Gateway is a simplified networking component to resolve challenges around resource sharing, inter-VPC connectivity and on-premise location to AWS VPC connectivity. Transit Gateway controls how traffic is routed among all the connected networks using route tables, which removes complex routing challenges as there are fewer components to manage when compared to other solutions like VPC peering and Transit VPC.

This scenario requires us to create a Transit Gateway in both regions. To start traffic between the AWS VPCs of different regions, we need to create a peering connection attachment between the Transit Gateways (here I should note that peering supports static routing only). With Transit Gateway we only need to maintain a single connection. This allows for easy maintenance when one considers the previous complex solutions at play like VPC peering. The Transit Gateway inter-region connection capability also brings the benefit of a single global network spanning across multiple AWS Regions. This single global network increases the network security and reduces the chance of a single point of failure.

The below resources are needed to deploy and configure for Transit Gateway:

The route table decides the next hop for the traffic coming from the resource attachment. For example, Development VPCs can be associated with one route table and Production VPCs with a different route table. This enables network segmentation for traffic. 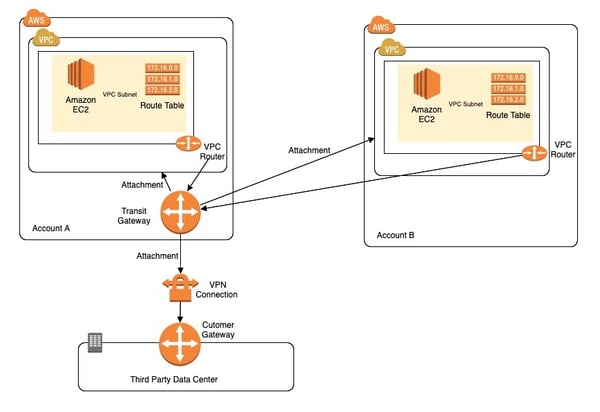 Part 3: Azure Functions on Kubernetes - have your cake and eat it too 22 June 2021
Part 2: Command your kitchen with queues and serverless functions 11 May 2021
Part 1: How to reduce your doughnut budget with microservices 28 April 2021
Optimal Development Workflow for Microservices 17 March 2021
Previous Article Next Article