The Logic Apps Webhook Action and the Correlation Identifier Pattern 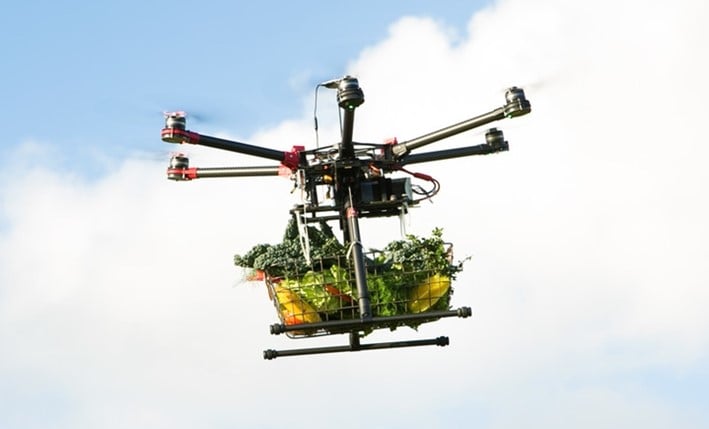 In many business scenarios, there is the need to implement long-running processes which first send a message to a second process and then pause and wait for an asynchronous response before they continue. Being this an asynchronous communication, the challenge is to correlate the response to the original request. The Correlation Identifier enterprise integration pattern targets this scenario.

Azure Logic Apps provides a stateful workflow engine that allow us to implement robust integration workflows quite easily. One of the workflow actions in Logic Apps is the webhook action, which can be used to implement the Correlation Identifier pattern. One typical scenario in which this pattern can be used is when an approval step with a custom API (with a similar behaviour to the Send Approval Email connector) is required in a workflow.

The Correlation Identifier enterprise integration pattern proposes to add a unique id to the request message on the requestor end and return it as the correlation identifier in the asynchronous response message. This way, when the requestor receives the asynchronous response, it knows which request that response corresponds to. Depending on the functional and non-functional requirements, this pattern can be implemented in a stateless or stateful manner.

A webhook is a service that will be triggered on a particular event and will result on an Http call to a RESTful subscriber. A much more comprehensive definition can be found here. You might be familiar with the configuration of webhooks with static subscribers. In a previous post, I showed how to trigger a Logic App by an SMS message with a Twilio webhook. This webhook will sends all events to the same Http endpoint, i.e. a static subscriber.

If you have used the Send Approval Email Logic App Connector, this implements the Correlation Identifier pattern out-of-the-box in a stateful manner. When this connector is used in a Logic App workflow, an email is sent, and the workflow instance waits for a response. Once the email recipient clicks on a button in the email, the particular workflow instance receives an asynchronous callback with a payload containing the user selection; and it continues to the next step. This approval email comes in very handy in many cases; however, a custom implementation of this pattern might be required in different business scenarios. The webhook action allow us to have a custom implementation of the Correlation Identifier pattern.

To implement the Correlation Identifier pattern, it's important that you have a basic understanding of the Logic Apps webhook action. Justin wrote some handy notes about it here. The webhook action of Logic Apps works with an instance-based, i.e. dynamic webhook subscription. Once executed, the webhook action generates an instance-based callback URL for the dynamic subscription. This URL is to be used to send a correlated response to trigger the continuation of the corresponding workflow. This applies the Return Address integration pattern.

To illustrate the pattern, I'll be using a fictitious company called FarmToTable. FarmToTable provides delivery of fresh produce by drone. Consumers subscribe to the delivery service by creating their personalised list of produce to be delivered on a weekly basis. FarmToTable requires to implement an SMS confirmation service so that an SMS message is sent to each consumer the day before the scheduled delivery date. After receiving the text message, the customer must confirm within 12 hours whether they want the delivery or not, so that the delivery is arranged.

As mentioned above, the scenario requires sending an SMS text message and waiting for an SMS response. For sending and receiving the SMS, we will be using Twilio. More details on working with Logic Apps and Twilio on one of my previous posts. Twilio provides webhooks that are triggered when SMS messages are received. The Twilio webhooks only allow static subscriptions, i.e. calling one single Http endpoint. Nevertheless, the webhook action of Logic Apps requires the webhook subscribe and unsubscribe pattern, which works with an instance-based subscription. Thus, we need to implement a wrapper for the required subscribe/unsubscribe pattern.

The architecture of this pattern is shown in the figure below and explain after.

Components of the solution:

To implement this solution, I'm going to follow the steps described below:

1. Configure my Twilio account to be able to send and receive SMS messages. More details here.

3. Create a Cosmos Db collection to store the instance-based webhook subscriptions. More details on how to work with Cosmos Db here.

4. Create the "Subscribe and Start Request Processing API". I'm using a Logic App workflow to implement this API as shown below. I hope the steps with their comments are self-explanatory.

The expected payload for this API is as the one below. This payload is to be sent by the webhook action subscribe call on the main Logic App:

You can have a look at the code behind here. Please use it just as a reference, as it hasn't been refactored for deployment.

5. Create the "Unsubscribe and Cancel Request Processing API". I used another Logic App workflow to implement this API. This API is only going to be called if the webhook action on the main workflow times out. The workflow is show below. 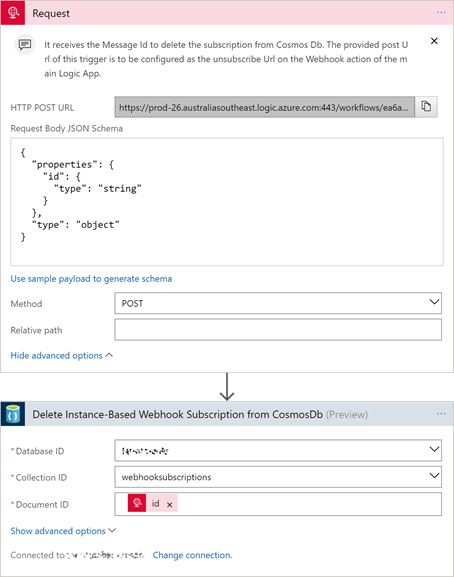 The expected payload for this API is quite simple, as the one shown below. This payload is to be sent by the webhook action unsubscribe call on the main Logic App:

The code behind is published here. Please use it just as a reference, as it hasn't been refactored to be deployed.

6. Create the Instance-based Webhook. I'm using another Logic App to implement the instance-based webhook as shown below.

The code behind for this workflow is here. Please use it just as a reference, as it is not ready to be deployed.

In order to trigger the Unsubscription API, the timeout property of the webhook action must be configured. This can be specified under the settings of the action. The Duration is to be configured the in ISO 8601 duration format. If you don't want to resend the request after the time out, you should turn off the retry policy. 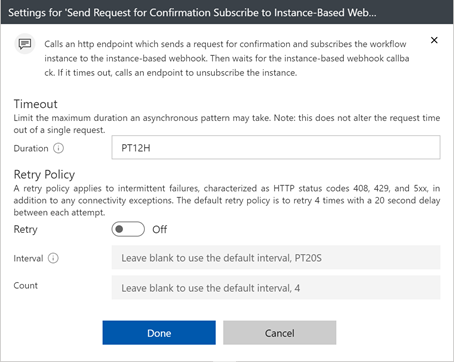 The code behind of this workflow is available here. Please use it just as a reference only, as it hasn't been refactored for deployment.

Now, we have finished implementing the whole solution! :) You can have a look at all the Logic Apps JSON definitions in this repository.

In this post, I've shown how to implement the Correlation Identifier pattern using a stateful Logic App. To illustrate the pattern, I implemented an approval step in a Logic App workflow with a custom API. For this, I used Twilio, a third-party service, that offers a webhook with a static subscription; and created a wrapper to implement the subscribe/unsubscribe pattern, including an instance-based webhook to meet the Logic Apps webhook action requirements.

Feel free to add your comments or questions below, and happy clouding!